Straight, No Chaser has discussed several sexually transmitted infections (STIs) at length, including gonorrhea, chlamydia and herpes. One thing that often gets overlooked or not given enough consideration is the risk of complications that occur when contracting a STI. Pelvic inflammatory disease (PID) is one consideration that should be up front and center as a consideration in your mind (assuming you’re female). If you’re not familiar with the term PID, commit it to memory, as this is a relatively common condition. 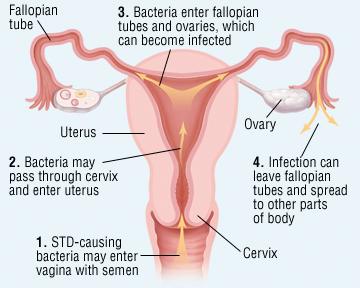 Pelvic inflammatory disease (PID) refers to an infection of the upper genital tract in women. It is usually sexually transmitted. PID is the single most common preventable cause of infertility in the U.S. According to the Center for Disease Control and Prevention (CDC); over 750,000 cases of PID occur in the U.S. every year.
Here’s your concern: PID can negatively affect your reproductive organs, including the uterus (womb), fallopian tubes (tubes that carry eggs from the ovaries to the uterus) and ovaries. The inflammation caused by PID scars affects organs and can result in infertility, tubal (ectopic) pregnancy, chronic pelvic pain, abscesses (pus pockets, aka “boils“) and other serious gynecological problems.  Most ominous is the fact that up to 20% of women may become infertile as a result of PID.
As mentioned, PID typically begins as an STI. Among STIs, gonorrhea and chlamydia are the most common causes. Here are additional risk factors for PID.

There is a pretty significant range in the way PID shows up. You may not have symptoms, or symptoms could be quite severe. Symptoms may include lower abdominal pain, fever and foul-smelling vaginal discharge. You may notice pain with sex or while urinating. Your menstruation may become abnormal.
This may sound odd, but the treatment of PID is much more important than its diagnosis. This is because a diagnosis may be difficult to reach due to the subtlety of symptoms, and the consequences of missing the diagnosis are severe enough that presumptive treatment is commonly done. Early treatment can prevent or limit long-term complications such as infertility and chronic pelvic pain. According to the CDC, without adequate treatment, 20-40% of women with chlamydia and 10-40% of women with gonorrhea may develop PID. Among those with PID, fully one in five (20%) may develop infertility and one in 10 (10%) may develop a tubal (ectopic) pregnancy. Chronic pelvic pain occurs in approximately 18% of cases of PID.
If you are thought to have or are diagnosed with PID, you will need antibiotics. It is critical that you take these until they are all gone. This is not an instance where you should stop taking the pills once you start feeling better. More specifics on the treatment of PID are provided at www.sterlingmedicaladvice.com.
What you really want to remember is that prevention is key. The best way to avoid STIs is to abstain from sex or to be in a long-term, mutually monogamous relationship with a partner who has been tested and isn’t infected. In addition, correct and consistent use of condoms further reduces your risk of STIs, including chlamydia and gonorrhea.
One more crucial means of protection from PID is early detection. If you think you or your sexual partner may have an STI, get evaluated and treated promptly.
Feel free to ask your SMA expert consultant any questions you may have on this topic.
Take the #72HoursChallenge, and join the community. As a thank you for being a valued subscriber to Straight, No Chaser, we’d like to offer you a complimentary 30-day membership at www.72hourslife.com. Just use the code #NoChaser, and yes, it’s ok if you share!
Order your copy of Dr. Sterling’s new books There are 72 Hours in a Day: Using Efficiency to Better Enjoy Every Part of Your Life and The 72 Hours in a Day Workbook: The Journey to The 72 Hours Life in 72 Days at Amazon or at www.72hourslife.com. Receive introductory pricing with orders!
Thanks for liking and following Straight, No Chaser! This public service provides a sample of what http://www.SterlingMedicalAdvice.com (SMA) and 844-SMA-TALK offers. Please share our page with your friends on WordPress, like us on Facebook @ SterlingMedicalAdvice.com and follow us on Twitter at @asksterlingmd.
Copyright © 2018 · Sterling Initiatives, LLC · Powered by WordPress