Straight, No Chaser: The Battle of Antioxidants and Free Radicals 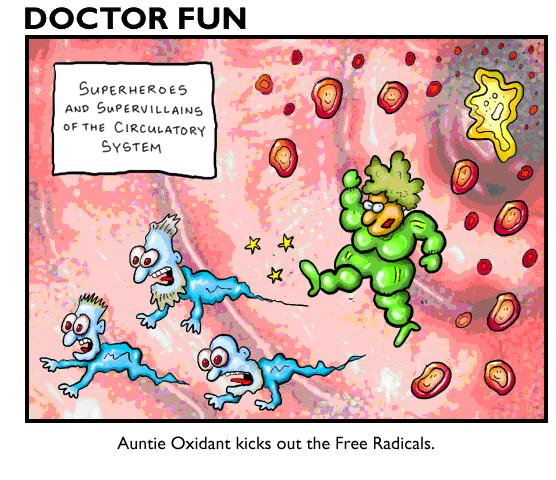 We engage in a lot of fads and off the wall activity to pursue health instead of following tried and true principles of basic science. One thing that I wish didn’t fit that trend is use of supplemental antioxidants. Before talking about using antioxidants, allow me to discuss why they’re necessary.
Free radicals are like the Tasmanian Devil. These molecules are byproducts of many activities that create cell damage. Think about cigarette smoke, trauma (even vigorous exercise), excessive heat and sunlight (and its radiation), to name a few examples. The process of creating and releasing these molecules is called oxidation. The key point is free radicals are unstable and too many of them lead to a process called oxidative stress. This process is implicated in the development of many illnesses, including Alzheimer’s disease, cancer, cataracts and other eye diseases, cardiovascular diseases, diabetes and Parkinson’s disease.
Antioxidants are substances that prevent or delay cell damage caused by free radicals. Antioxidants may be natural or artificial (e.g. man-made). The healthy diets we’re always asking you to eat (e.g. those high in fruits and vegetables) contain lots of antioxidants; in fact this has a lot to do with why we believe they’re good for us. Of course, now you can get many forms of antioxidants in pills. That’s where things get a little less certain.
Logically, you’d think that if some antioxidants are good, a lot would be better, and they would really be effective against free radicals. Furthermore, you’d think a convenient and efficient way of doing this would be putting a lot of antioxidants in a pill. Unfortunately, medical science (including over 100,000 people studied) has shown this not to be as simplistic as our logic would have us believe. I can’t say this any simpler. Antioxidant supplements have not been shown to be helpful in preventing disease. In fact, high-dose supplementation has been shown to have harmful effects, including increasing the risks of lung and prostate cancer. In short, our body doesn’t function in as linear a manner as we would like to think.
Here’s your take home message: We have yet proven that we’re able to cheat Mother Nature. You will not find your health in a bottle. Diet and exercise remain the champions of the battle of pursuing good health. Get your antioxidants the old fashioned way – in your fruits and veggies. Here’s a nice chart for your reference. 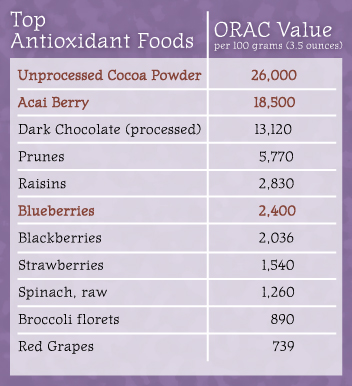 0 thoughts on “Straight, No Chaser: The Battle of Antioxidants and Free Radicals”