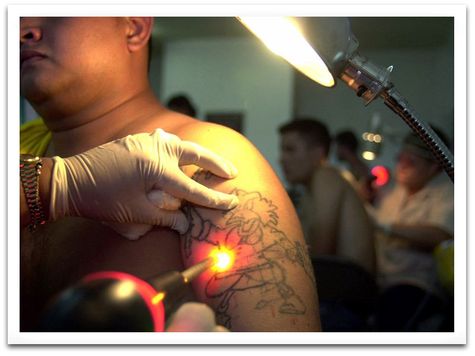 You may find it interesting that people have been obtaining tattoos throughout recorded history. You may also find it interesting that of those getting tattoos, approximately half will have those tattoos removed. This Straight, No Chaser discusses how that’s done through laser removal. I’ll also address the question that’s most likely to be burning through your brain (no pun intended).
First, it’s important to offer a warning – not about this post, but about your skin. One would think you’d be extremely cautious about anything that disfigures or otherwise marks your skin. I would respectfully advise you to think long and hard about the decision either to obtain or remove a tattoo. Too often, these decisions are made on a whim, either emotionally or based on financial considerations. It is not uncommon to see such patients in the emergency room with cellulitis or keloids. 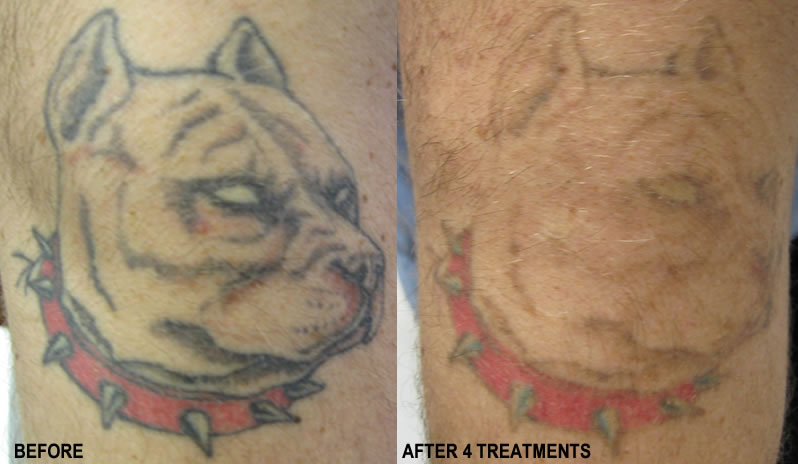 To get started, let’s get an understanding of what’s being accomplished. Understanding this will assist you in the decision to proceed with laser or other forms of tattoo removal. The various colors of your tattoos consider of simple pigments. Lasers are absorbed by these pigments, which results in their being broken up. This theoretically should leave your skin to show through the previously tattooed area. It’s important to appreciate that different pigments absorb different laser wavelengths. Black pigments absorb all laser wavelengths and thus are easiest to remove. Alternatively, tattoos with more colors are more difficult to treat. Laser tattoo removal performed by a dermatologist or cosmetic surgeon represents a level of expertise that further distinguishes laser tattoo removal from other methods. 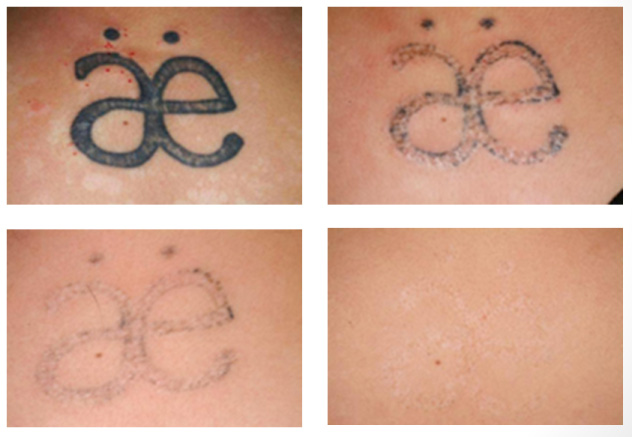 Regarding the effectiveness of laser tattoo removal, it gets the job done. It gets it done in those who previously tried other treatments, methods or remedies, as long as the tattoos aren’t complicated by significant scarring from those earlier efforts. Laser removal typically takes between two and four treatments, although this varies based on several considerations, such as skin color, pigment/color variety in the tattoos, patient age and size of the tattoo. These considerations can result in additional treatments being necessary.
Regarding the procedure, most don’t require anesthesia (numbing medicine), but those that do may receive a topical skin cream or injection at the site. This often helps for the portion of the procedure during which the skin is being tested (to determine the needed amount of energy for the laser). The treatments are often described as similar to feeling a rubber band snap against the skin. Another more painful description is feeling the equivalent of a grease splatter. After the treatments, topical antibiotic cream and sunblock will be given, and an ice pack will typically be applied to the bandaged area.
Laser tattoo removal has minimal side effects, although a few are possible, including the following:

So, to your question: “What about the shop corner tattoo removal shops?”

I’ll respond to this question without getting overly clinical. There are multiple forms of tattoo removal that have been shown to be effective. There is one – laser tattoo removal – that clearly gives you the best likelihood of a satisfactory result and the lowest probability of significant side effects. There’s also no question that this method is the most expensive. For completeness sake, here are some additional methods of tattoo removal.

Getting your tattoo removed by one of these methods could result in a good outcome. It’s just more likely not to, and more likely to result in scarring or other side effects. There’s a choice to be made. Just realize this is your skin (and often your outward appearance) that’s at risk here.

Thanks for liking and following Straight, No Chaser! This public service provides a sample of 844-SMA-TALK and http://www.SterlingMedicalAdvice.com (SMA). Enjoy some of our favorite posts and frequently asked questions as well as a daily note explaining the benefits of SMA membership. Please share our page with your Friends on WordPress, on Facebook at SterlingMedicalAdvice.com and on Twitter at @asksterlingmd.