Straight, No Chaser: The Roof Is On Fire – The Trauma of Residential Fires 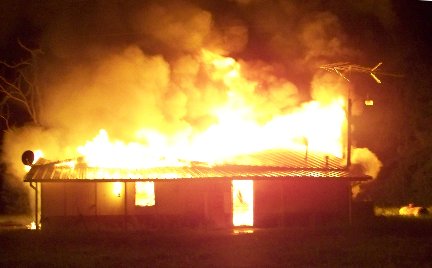 As Trauma Week winds down on Straight, No Chaser, we work our way back home, which sadly is the site of most traumatic injuries.  In fact, about 85% of all U.S. fire deaths occur in homes.
The good news is the number of residential fire-related deaths and associated injuries is going down, but that won’t help you if you aren’t aware of how to prevent them and get to safety and cared for in the event a fire occurs in your home.  Let’s address this right off the bat.  You’re most likely to die or be injured from a fire if you’re in one of the following groups, according to the Center for Disease Control (but of course, the fire doesn’t check who’s being burnt):

In the U.S. (2010 data), someone dies every 169 minutes and is injured every 30 minutes, amounting to over 2,500 deaths and over 13,000 injuries (and that’s not including firefighters).  Interestingly, victims aren’t burning to death as much as they are dying from inhalation injuries from smoke and gases (estimated to be the cause of death in between 50-80% of cases).  Speaking of smoke, although cooking is the #1 cause of fires, smoking is the leading cause of fire-related deaths.  Alcohol consumption is a contributing factor in 40% of residential fire deaths.  Most fires occur in the winter.
So What To Do?

Tips on How You’ll Be Treated
Fire-related injuries commonly involve burns and bony injuries (bruises, sprains, fractures), which will be addressed as needed.  However, the most important fire-related injuries involve the airway.  These injuries may be due to the heat’s effects on the airway (burns, swelling and inflammation) and/or the effects of carbon monoxide and/or cyanide (inability to oxygenate).  One important fact for families to realize is the presence of any soot/burns anywhere near or in the mouth or nose needs to be evaluated.  Such signs and symptoms are powerful predictors of potential airways damage and imminent failure.

0 thoughts on “Straight, No Chaser: The Roof Is On Fire – The Trauma of Residential Fires”