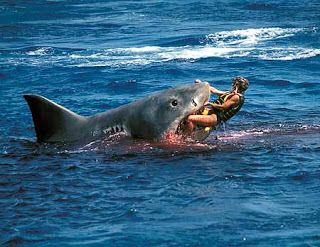 Human Shark Week wouldn’t be complete without reviewing something getting bitten.
Bow-Wow Ows
Dogs bite almost 5 million people yearly, resulting in 800,000 visits to a healthcare provider. Injuries are highest for kids between ages 5-9.
Most dog bites are to the upper extremities (imagine yourself reaching out, petting or slapping a dog), but in kids most injuries are to the head and neck (they’re smaller). Here’s some tips to avoid getting bitten.

Mee-Ow Ows
In general, cat bites and scratches are much worse than dog bites. Cat bites and scratches are more of the puncture wound variety, seeding and walling off very infectious bacteria deep inside of you, which then grow and cause infections. Dog bites are more of the ripping, tearing variety, which poses different problems, but they aren’t as dangerous from an infectious disease standpoint. Cat bites cause skin and blood infections. You’ll know this by warmth, redness, pain, and pus from the wound site. Fever may also be present if the infection is severe enough, and yes, cat bites can be fatal if untreated. You may have heard of ‘cat-scratch fever’. It’s a real phenomenon.
All bite wounds should immediately be washed under high pressure running water but you want to avoid any scrubbing. Pressure to bleeding wounds is important. Time is also important. Both cat and dog bites need to get evaluated. Expect to receive antibiotics in the vast majority of cases. Some bites will require stitches; others will not. That’s a decision for the medical professionals. Treatment may include tetanus and rabies vaccines.
Get in and be seen, especially with cat bites/scratches, which can cause loss of life and limb if not dealt with rapidly and effectively.
By the way, since this is my blog, I’ll just say stop it with letting your dogs lick you and kiss you in the mouth. That’s just nasty (and that’s medically speaking). Don’t you know where their mouths have been?
The Big Yow Wow! Ow
Shark bites are the things of legends, thanks to movies like Jaws and The Deep Blue Sea, which gives the impression that sharks are serial human killers. In fact, there are about 100 shark attacks worldwide yearly, with about 15-20% of attacks being fatal. I doubt that most Straight, No Chaser readers will be shark bait anytime soon, but the first thing I will mention that’s important to know is unlike other attacks by potential predators, playing possum doesn’t work with sharks. Fight back and fight dirty, attacking the eyes and gills. Apparently, sharks like easy food. In case you’ve ever wondered, sharks aren’t biting you because they’re hungry but because they’re curious. They don’t encounter humans often and similar to how a baby puts about anything in its mouth, sharks will take an ‘exploratory bite’. The typical human who swims frequently enough to be in shark infested waters isn’t obese enough to keep sharks’ interest and be a focus of their diets, particularly with so many other options. The other curiosity about sharks is after that first nibble, they tend to back off and wait for prey to die before returning for the kill. They don’t seem to like fighting wounded and aggressive victims. Rather lazy, I’d say.
The real danger in shark bites is the amputation. Single bites of arms and leg can cause enough blood loss and subsequent infection to kill you, just like any other amputation. Obviously a bite to your skull, chest or abdomen can kill instantly. Treatment primarily involves aggressive fluid resuscitation and other life-supportive measures, along with assessment of infection risk with antibiotics as necessary.
The Most Dangerous Animal of Them All
I’ll blog on human bites as a separate topic; it’s that frequent and important. For now, understanding that the human mouth is especially dirty and dangerous should hold you over. In the meantime, pay attention to your household pets and use the tips mentioned to avoid infection.