If you’re being featured in on a site named “Afro” years after you started shaving (not bald!), then the ancestors must be showing favor on you. Hope you enjoy the read.

1. What is ivermectin? How is it currently used?
In humans, ivermectin is an anti-parasitic medication. Although it’s often called an anti-worming medication, microscopic parasites are completely unrelated to what we think of as worms. They also aren’t at all like viruses, and so it isn’t intuitive to think this medicine could be effective against viruses. Now in animals, it does treat heartworms, but that has nothing to do with treating viruses.

2. How did the medical notion that ivermectin could be used arise?
Many nations without the benefit of COVID-19 vaccines have taken to using experimental drugs in hope of a “cure.” Ivermectin is one such drug. It has been shown to stop growth of COVID-19 cells in an Australian laboratory (meaning in a petri dish, not in humans). However, be reminded that most medicines will do the same at toxic levels. You can’t take toxic levels of medicine to kill COVID-19 without damaging yourself. It’s like the difference between taking a normal dose of Tylenol to treat pain vs. overdosing on higher levels. Somehow, many of the same people skeptical of the mountains of COVID-19 vaccine research or the previous EUA (and current full approval of Pfizer’s vax) are satisfied with data from a petri dish that hasn’t been confirmed in humans or approved by regulatory agencies.

3. Is the ivermectin used in humans the same as is used in animals?
This is where I remind you why FDA approval and regulation of medications is important. The animal preparations of ivermectin contain about 7 times the amount of active ingredient as the human one (remember that horses are about a ton heavier than humans). Do you care about side effects or toxicity? Care about purity of the preparation? I can’t believe I have to say this, but taking medicine formulated for animals is a disaster waiting to happen.

4. What does the research on ivermectin show?
Simply put, with dozens of research studies completed and ongoing, it clear there isn’t sufficient evidence to say this works against COVID-19. However, there was one paper that created quite the fervor. It summarized the results of a clinical trial seeming to show that ivermectin can reduce COVID-19 death rates by more than 90%. Unfortunately, the study was later withdrawn amidst concerns about plagiarism and data manipulation (read: fraud). Sadly, a lot of those excited about the news missed the follow up reporting. It’s of note that Merck, the pharmaceutical maker of ivermectin, says they have found no scientific basis for a potential therapeutic effect against COVID, no meaningful evidence for clinical activity or clinical efficacy in people with COVID, and a concerning lack of safety data in the majority of studies. Read that again: this is from the manufacturer.

5. What does the WHO, FDA and CDC say about ivermectin?
Regulatory agencies around the world are clear and unanimous that there is no current role for ivermectin in the treatment of COVID-19. Here’s a full statement: https://www.fda.gov/…/why-you-should-not-use-ivermectin…

6. Why not try it? Is it dangerous?
That’s now how medicine works. This is a potentially toxic medicine. “Try it and see” isn’t how medicine is prescribed. Besides, ivermectin can cause nausea, vomiting, diarrhea, low blood pressure, allergic reactions, dizziness, problems with balance, seizures, coma, and death. For what it’s worth, it’s now legendary that those taking the animal preparations are literally pooping their pants. Also, even at approved doses, ivermectin can interact with other medications (e.g. blood thinners).

7. How is this happening? If I “followed the money,” who stands to gain from ivermectin being promoted?
If you are familiar with the group called America’s Frontline Doctors, you’ll recognize them as an ongoing source of disinformation, including prior claims that hydroxychloroquine was a miracle cure. More notoriously, they have been offering online consultations to those seeking ivermectin, at a cost of $90 a pop, subsequently connecting the willing to an affiliated pharmacy that would deliver the medicine. By the way, the use of the animal preparations arose from these pharmacies continually being out of stock (monthly prescriptions have increased from 3600 pre-pandemic to over 88,000 in August 2021). That alone is about $8M/month in revenue to perpetrate a fraud, as the saying goes. 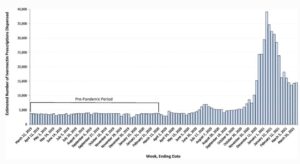 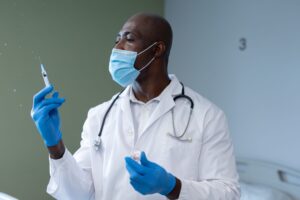 Here are four tips for your consideration.

3. Get your booster 8 months after your last dose. Unless you are immunocompromised or otherwise qualified to get an earlier booster, appreciate that the point of the booster is to provide longer lasting immunity. This is a more of a long-term play than a short-term boost. Rushing to go out and get it earlier misses the point.

4. Move with purpose. Your choices either increase or decrease your risk. You know a superspreader event or a high-risk activity when you see one. Avoid them.

Be safe. Buckle in. We’re still going to be here awhile.

It’s always important to point out the other components of combatting COVID-19. Kudos to the Chicago Teachers Union for standing for full adherence to CDC guidelines if children are to be returned to classrooms. We don’t need a scenario in which months from now we’re questioning how we allowed foreseeable and preventable bad outcomes to occur in unvaccinated children.