HIV Awareness Month – Can HIV Be Eliminated From the Body? 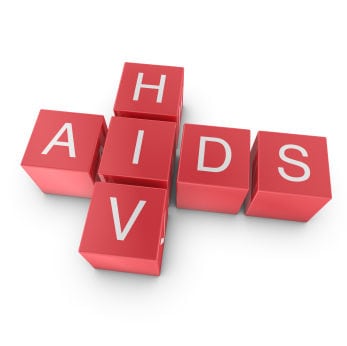 It’s HIV Awareness Month. Certainly you’ve noticed there’s a lot less chatter about HIV lately. Don’t be lulled into a false sense of security. It is still causing death. Let’s review the latest on HIV in the next few posts.

Look at the above picture. You would think it shows Ervin “Magic” Johnson donating blood. As most everyone knows, Magic famously retired from the NBA after contracting HIV. As we delve into this post, remember two important points.

So does this mean it’s safe for certain “former” HIV(+) patients to donate blood? Can they now engage in activities others who are not HIV(+) can? HIV is a fascinating virus, and the more you know about it, the better off you are. This is especially particular when it comes to protecting yourself from contracting the virus. Several of our posts have addressed HIV/AIDS.

In the meantime, consider the following. You’ve had many diseases over your life.

I bring this points up to point out that at some point, once we truly discover a cure for HIV and actually are successful at eliminating the virus from the body of those infected, it makes sense that you could see someone who was HIV positive donating blood.

That is not a picture of Magic Johnson donating blood. Probably, he is having blood drawn. Alternatively, it could be a picture of someone else donating blood with Magic’s head photoshopped onto it. How do I know this, even without going directly to the source?

HIV Awareness in the news…

A case study exists that is about as close to this scenario as it gets. A baby thought to have been “cured” of HIV recently has now been re-diagnosed with the virus. She was born to a HIV(+) mother. Consequently, she was pre-emptively treated with three antiretroviral drugs for 18 months. Unfortunately, doctors lost track of the infant. Subsequently, she was brought to a clinic for a visit after ten months of receiving no HIV medication. The medical team found no evidence of the virus in her blood. As a result, she was declared “functionally cured.”

Unfortunately, the virus has now returned. The child was found to have high levels of HIV in her blood during a routine visit to the University of Mississippi Medical Center. This is where she was originally discovered to be HIV(-). Decreased levels of CD4+ cells, the white blood cells targeted by HIV, along with the appearance of antibodies against the virus in her blood, suggest that her remission had come to an end, and that traces of virus remaining in her body had escaped from immune control.

There have now been several cases of cures and relapses. Here’s a bottom line consideration. Give medicines as early as possible. This keeps the virus in check. However, one should not expect early treatment to completely eliminate HIV. 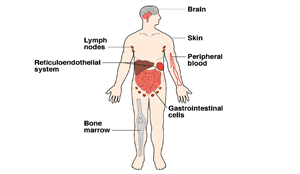 You may wonder how it’s possible for HIV to become undetectable or to relapse once seemingly “eradicated.” We know the HIV virus can hide away in tissues such as lymphoid and gut cells (see above picture). Unfortunately, medicines can only reach the virus located in the blood. This is why you don’t stop therapy! The virus can emerge from these other locations and relaunch its attack. This explains why most HIV patients need to take antiretroviral drugs daily over the course of their lives,.

The biggest hope for tackling the problem is to find drugs that flush inactive HIV out of its hiding places in the body. This would facilitate all the virus being eliminated. Accordingly, this would effectively cure the patient and eliminate the need to take more antiviral drugs.

Furthermore, this isn’t much of a surprise. Other diseases go dormant inside the body. The classic example of this is the family of herpes viruses. Many of you are aware that a herpes simplex virus can reappear after decades of being absent. Similarly, chicken pox and shingles – diseases caused by the herpes zoster virus – can reappear after having run their course during the initial infection. At this point, it appears that HIV is more like the herpes viruses in this regard than examples of other infections and disease that can be completely eradicated. 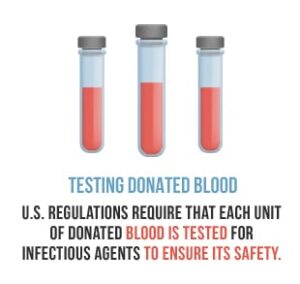 The latest on blood transfusions and transplants

There are theoretically reasonable possibilities about the prospect of receiving blood or organ donations from someone who had been HIV-positive. However, in the US it’s been decided it is currently not yet prudent to do so. Even though HIV can be completely eliminated from the blood of patients, the ethical bridge hasn’t yet been crossed. Unfortunately, that is not the same as eliminating HIV from the body. Thus, the American Red Cross and others involved in blood transfusions will not accept donations from anyone ever having been HIV(+).

For those in need of a life-saving blood transfusion, having individuals step up to donate is vitally important. Please consider doing so.

Stay tuned to Straight, No Chaser. HIV awareness will continue this week with additional posts on topics of interest.

Feel free to ask your SMA expert consultant any questions you may have on this topic. Take the #72HoursChallenge, and join the community. As a thank you, we’re offering you a complimentary 30-day membership at www.72hourslife.com. Just use the code #NoChaser, and yes, it’s ok if you share!

Order your copy of Dr. Sterling’s books There are 72 Hours in a Day: Using Efficiency to Better Enjoy Every Part of Your Life and The 72 Hours in a Day Workbook: The Journey to The 72 Hours Life in 72 Days at Amazon or at www.jeffreysterlingbooks.com. Receive introductory pricing with orders!