Just a month ago, Straight, No Chaser discussed Mass Trauma, Community Stress and Post-Traumatic Stress Disorder. If you’ve been following the news, it may have occurred to you that recent events involving shooting of civilians and police officers could either be the result of or the precipitant of individual and community stress rising to the level of post-traumatic stress disorder (PTSD). As a reminder, episodes that some might be able to handle when taken in isolation can have dramatically different psychological effects on others.

When entire communities are affected by a mass trauma such as a natural disaster, a terrorist attack, the effects of war or a seemingly senseless death within the community, many within the community can subsequently develop signs of post-traumatic stress disorder (PTSD). Although it is most correct to note that symptoms tend to develop in the first few weeks after the episode, victims are likely to be hyperreesponsive to subsequent stimuli long into the future. New stimuli can then trigger abnormal responses. In many ways, what is happening now is a normal, expected and shared community response to serious trauma.
Now with all due respect to our veterans, PSTD is not limited to those who have participated in wars (although it is of note that those involved in the execution of police officers both had military backgrounds). Would it be easier to accept, understand and empathize with those involved if these events had happened immediately after having served in the arena of war? Why hasn’t there been a discussion of these issues through this prism? More importantly, why hasn’t support and solutions been fashioned for involved communities accordingly?
Take a breath, and conceptualize the cumulative effect on a community of slavery, Jim Crow, all the various forms of oppression and institutional racism that have come with that and now the ongoing senseless, avoidable and largely unpunished loss of life at the hands of those meant to “Serve and Protect?” One could argue that remarkable restraint has been shown, all things considered. 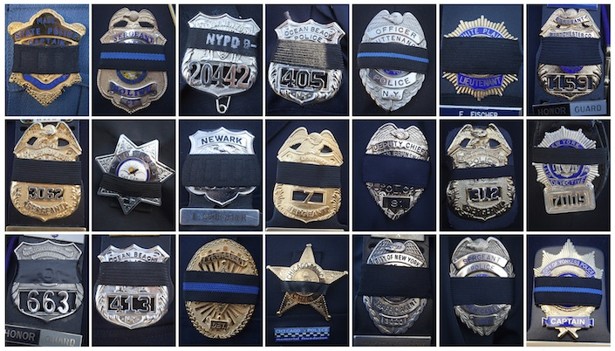 How can anyone question the multitude of stimuli that have been present of late, poised to affect someone affected by PTSD? How can we be blind to the notion that communities (most notably the African-American community) and the “fraternity” of police officers are both (not to be confused with equally) addressing an abnormal level of stress and fear? That’s right. Now the police are involved. Whether or not the recipients of the initial affronts, or whether or not you believe it to be reasonable, when a community (of police officers) begin being besieged by random killings of officers, they will respond a certain way. However, the involvement of the police comes with a different consideration: they are empowered to strike back. Officers can shoot to kill if confronted with subsequent dangerous situations in which they believe there lives are in danger. Has there been any discussion about the inherent danger of leaving in place such power to individuals under this level of stress without specific, additional cultural sensitivity training and counseling on PTSD?
Traditionally, when communities suffer mass trauma, resources are more likely to become readily available, which allows many to experience a lessening of symptoms over time.
In the immediate timeframe of the event, vital measures for physical and mental wellbeing should include the following.

Unfortunately, some individuals just do not get better on their own. Although most people tend to improve with time after a community disaster, it is not uncommon for some to become more distressed and to exhibit more symptoms of PTSD, depression, and other mental health conditions. There are so many variables in play based on the type of disaster that occurred. Some people are effective at rebuilding their lives if the available resources are appropriate for the type of effect it had on them personally, but others may experience ongoing stress from loss of jobs and schools, trouble paying bills, finding housing, and getting healthcare. These types of stressors compound the effects of the disaster and may delay recovery in those affected by PTSD.
Many in the public health communities are embracing a comprehensive version of mass trauma “psychological first aid.” This complement to medical and financial resources is meant to fill existing voids in post-community disaster care delivery. Otherwise treatment approaches are generally similar to treatment of other forms of PTSD.
It is time to add these considerations to the current conversation. Fear, retaliation and conversation isn’t enough and will only contribute to a never-ending spiral of death. Our leadership needs to begin implementation of services and support to address the broad factors in play.

If you are interested in the other posts in the Straight, No Chaser series on Post-Traumatic Stress Disorder (PTSD), they are listed below.