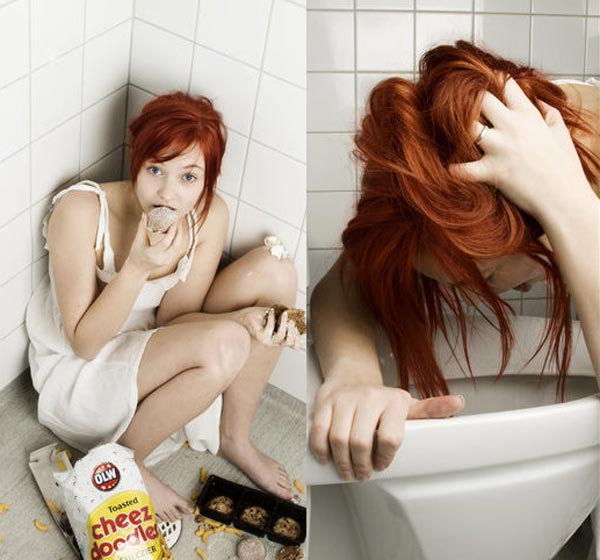 If you read Part I of this conversation on eating disorders (anorexia nervosa), you will recall that eating disorders are a mix of an abnormal body image combined with abnormal behaviors that lead to medical consequences. Today’s Straight, No Chaser is on bulimia, yet another dangerous eating disorder.
The ‘Bizz-Buzz’ of bulimia nervosa is ‘binge-purge.’ What that means is bulimics engage in frequent episodes of eating excessive amounts of food (bingeing) followed by one of several methods of eliminating what was just ingested (purging). This methods include forced vomiting (most common), use of diuretics or laxatives, fasting or excessive exercise. It is important to note that the bulimic feels a lack of control over these episodes.

Bulimia is an especially dangerous disease because it usually occurs in secret, and victims are able to hide it. This means symptoms will typically be further along when discovered. Bulimics usually manage to maintain a normal or healthy weight despite their behavior and may appear to be the person who ‘never gains weight’ despite ‘eating like a horse.’ This is a key differentiator between bulimia and anorexia. Otherwise, the two diseases do share some of the same psychological pathology, including the fear of weight gain and the unhappiness with physical appearance.
Treatment considerations for bulimia are similar to those for other eating disorders. A combination of psychotherapy, reestablishment of normal nutritional intake and medications usually leads to marked improvement. Again, the particular challenge with bulimics is discovering the condition in the first place. As with anorexia nervosa, treatment for bulimia nervosa often involves a combination of options and depends upon the needs of the individual. Medications may include antidepressants, such as fluoxetine (Prozac), if the patient also has depression or anxiety.
Let’s recap by revisiting where we started with our conversation on anorexia. Our society doesn’t do the job it should in promoting a normal image of health. The typically promoted American ideal of beauty sets standards that lead many to pursue unrealistic means of meeting that ideal. In the setting of an actual American population that is obese by medical standards, this becomes even more of a problem. The levels of stress, anxiety and depression resulting from this reality sometimes leads to eating disorders. Remember, eating disorders aren’t just habits. They are life-threatening conditions. If you or a loved one is suffering, please seek help immediately.

Post-script: If you’re wondering about the above picture of the teeth, you’re viewing the effects of all that regurgitated acid on the enamel layer of your teeth.  I know. It’s not your best look.
Thanks for liking and following Straight, No Chaser! This public service provides a sample of what 844-SMA-TALK and http://www.SterlingMedicalAdvice.com (SMA) offers. Please share our page with your friends on WordPress. We are also on Facebook at SterlingMedicalAdvice.com and Twitter at @asksterlingmd.