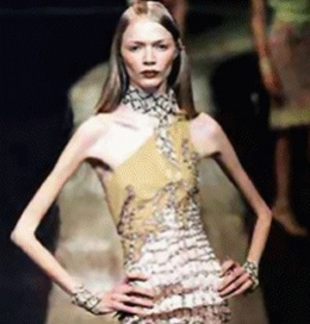 Our society doesn’t do the job it should in promoting a normal image of health. The typically promoted American ideal of beauty sets standards that lead many to pursue unrealistic means of meeting that ideal. In the setting of an actual American population that is obese by medical standards, this becomes even more of a problem, as individuals give up on realistic goals and settle into unhealthy eating habits that lead to disease due to obesity.
Most people are aware of two eating disorders–on the low side (obesity is another conversation): anorexia and bulimia. It is important to note that eating disorders are real medical and mental diseases. It is equally important to understand that they can be treated. It is vitally important to understand that when left untreated these disorders lead to a much higher incidence of death than in those without these conditions. These diseases cause severe disturbances in one’s diet, so much so that individuals spiral out of control toward severe disease and death in many instances. Sufferers of eating disorders often have a distorted self-image and ongoing concerns about weight and appearance. (This is as true for those pathologically overweight and in denial as it is for those pathologically underweight.)
Today, I’ll discuss anorexia. Anorexia nervosa is an eating disorder with nearly a 20 times greater likelihood of death that those in the general population of a similar age. Why, you ask? Simply put, they’re suffering the consequences of starving themselves. Anorexics have a maniacal and relentless pursuit of thinness, even in the face of being extremely thin. They couple an unwillingness to maintain a healthy weight with an intense fear of gaining weight. They possess a distorted view of their bodies and severely restrict their eating in response. They are obsessed.
Other symptoms and habits of anorexics include a lack of menstruation (among females, though men suffer from anorexia, too), binge-eating followed by extreme dieting and excessive exercise, misuse of diuretics, laxatives, enema and diet medications. The medical manifestations of anorexia are serious and can include osteoporosis or osteopenia (bone thinning), anemia, brittle hair and nails, dry skin, infertility, chronically low blood pressure, lethargy and fatigue, and heart and brain damage. It’s worth noting again that people die from anorexia. It is to be taken seriously.
The key components of treating eating disorders in general are stopping the behavior, reducing excessive exercise and maintaining or establishing adequate nutrition. The pursuit of adequate nutrition is vital enough that when patients develop dehydration and chemical imbalances (i.e., electrolyte abnormalities), they need hospitalization to correct deficiencies.
Specific management of anorexia involves addressing the psychological issues related to the eating disorder, obtaining a healthy weight, and consuming sufficient nutrition. This may involve various forms of behavioral therapy and medication. Regarding medication use, although some (such as antipsychotics or antidepressants) have been effective in addressing issues related to anorexia such as depression and anxiety, no medication has been proven effective in reversing weight loss and promoting weight gain back to a healthy/normal level. Similarly, behavioral therapy has been shown to assist in addressing the roots causes of anorexia but insufficient in addressing the medical issues that the disease contributed to or caused. Ultimately, it appears that a combination of medications, other medical interventions and behavioral therapy is the most effective course. As is the case with most illnesses, the earlier treatment is initiated, the better the outcome tends to be.
Please maintain a sufficient sensitivity toward those with anorexia. It’s a life-threatening condition, not the punch line of a joke about someone’s appearance.
Thanks for liking and following Straight, No Chaser! This public service provides a sample of what http://www.SterlingMedicalAdvice.com (SMA) offers. Please share our page with your friends on WordPress. We are also on Facebook at SterlingMedicalAdvice.com and Twitter at @asksterlingmd.

One thought on “Straight, No Chaser: When Eating Goes Wrong, Part I – Anorexia”