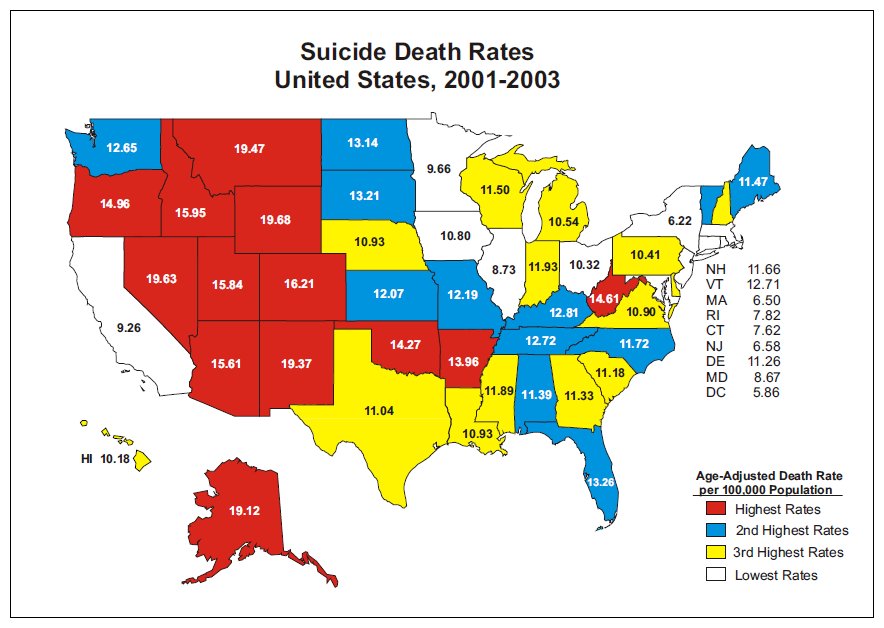 There are amazing, shocking and saddening facts about suicide.  It is equally amazing that we aren’t discussing this as an epidemic.  Consider the following information provided by the Centers for Disease Control and Prevention:
There were an average of 105 suicides a day in the U.S. (over 38,000 for 2010).
An estimated 8.3 million adults reported having suicidal thoughts in the past year.
Suicide is the third leading cause of death among those aged 15-24, the second among those aged 25-34, the fourth among those aged 35-54, and the eighth among persons aged 55-64.
For those committing suicide:

Females are more likely than males to have had suicidal thoughts, but suicide among males is four times higher than among females (in other words, females think about it and try more often, but males complete the act more often.).
Among Native Americans aged 15-34, suicide is the second leading cause of death, fully 2.5 times higher than the national average.
There are some topics that aren’t amenable to Blogs.  Depression and suicide are among them.  They can’t be done justice.  What I can try to do is break components of the conversation into bite size pieces and give you information to work with.  I’ll do this in three parts.  Above, I’ve shown you the magnitude of suicide.  In the next post, I will help you understand what clinical depression looks like, then finally, I’ll review some Quick Tips to help you prevent falling into the deepest levels of depression and to help you know when immediate attention is required.  Just remember: this isn’t the type of depression that involves having a bad day.  I’m talking about when your downward mood interferes with your activities of daily living.  I’m describing depression that introduces suicide and homicide as an option.  If you don’t read these for yourself, read them for knowledge.  Someone you know may be affected.
I welcome any questions, comments or thoughts.

0 thoughts on “Straight, No Chaser: Suicide Data – Understand the Threat”