Straight, No Chaser: This is Specifically For the Faint of Heart 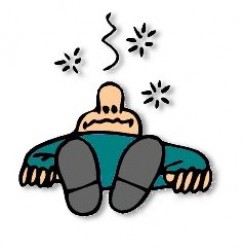 Don’t faints seem mysterious?  It’s as if your computer crashed and had to reboot.  Although we never seemingly figure out why computers are so crazy, fainting (syncope) is reducible to a common denominator: something causes a decrease in blood flow to your brain.  Recall that oxygen and other needed nutrients are carried in blood, so even a temporary stoppage or shortage of blood flow shuts things down.  Now extrapolate that to strokes and comas, which are often due to serious and prolonged causes of blockage to the blood vessels supplying the brain.  This is a prime example of why good blood flow and good health are so important.  The brain is a highly efficient, oxygen and energy-guzzling organ.  Shut it down for even a few seconds, and bad things start to happen.  Consider fainting a warning sign.
I’m going to start by offering some Quick Tips to help if you find yourself around someone who has fainted.  Then, I will get into the weeds of why these things happen for those interested.  I’m doing this so you can check these and determine where your risks may be.

Actually, faints are caused by all kinds of medical problems.  I list a few notable causes below, but whether the front end difficulty is with the heart pumping, the nerves conducting, or the content of oxygen or energy being delivered, the end result is the same.

0 thoughts on “Straight, No Chaser: This is Specifically For the Faint of Heart”